During the summer, the west wind blows cool and fresh across Mackinac Island. The breeze is particularly noticeable on the elevated 1st tee of Wawashkamo Golf Club. From this vantage point a golfer can see most of the wide-open links stretching toward the forest that masks the shore of Lake Huron. A lazy seagull cries out overhead; a ferry boat’s whistle drifts softly up from the harbor a mile-and-a-half to the south; to the golfer’s right, a whirring sound heralds the approach of a pair of bicyclists. Ahead of them lies the longest pedaling-free length of road on the Island, nearly a mile of downhill coasting to British Landing and the shore road. History is never far away on Mackinac Island. At the top of this ridge, on Wawashkamo’s 1st tee, the golfer stands on the spot where British cannon roared on August 4, 1814. This is high ground for warriors and for golfers. Below, across the old sand pit-turned sand trap, are the long 1st and 5th fairways, once part of a farmer’s field where American soldiers charged in a futile attempt to drive the British from their hill.

One of Michigan’s oldest active courses, Wawashkamo celebrated its Centennial in 1998. On that occasion, Wawashkamo could claim the distinction of being one of very few American courses laid out in a links style that remains substantially unaltered. Named one of America’s Historic Golf Landmarks by Golf Digest in 1996, Wawashkamo is the only nine-hole course among the dozen in the United States to have been so designated. The development of Wawashkamo Golf Club and the survival of its unique brand of traditional golf parallels the uncommon history of Mackinac Island, a place where much of the flavor of the nineteenth century survives, insulated from the modern world by the blue moat of Lake Huron, a ban on motorized vehicles and public ownership of eighty percent of the land.

At the time Wawashkamo was designed, one major innovation by club-makers like Alex Smith was the multiplication of golf irons and the beginnings of standardization. The old “niblicks”, “mashies” and “mid-irons” were being redefined into numbered irons contained in a cylindrical golf bag that could be carried by a caddie. Club selection thus became a key part of the game. Smith’s use of rolling terrain at Wawashkamo, as well as numerous hidden and non-hidden roughs, was a homage to this new specialization of the golf iron. Smith, who knew irons because he hammered them out himself, designed the Wawashkamo course to encourage the golfer to pull every club out of the bag.

Alex Smith and Frank Rounds imported one major and enduring design element to Wawashkamo from the Scottish links pattern. The snuffbox-sized tees and exquisite, hard-to-hit greens, easier to maintain with the twelve-inch push mowers of the 1890s, remain practicable today under northern Great Lakes golfing conditions. No tees and greens meant to be played on for eight to twelve months a year could hold up to the intensive soil compaction and wear of continuous use on such small surface areas. Wawashkamo, however, was designed as a summer-only course. Ironically, this meant that it could retain its Victorian-dimension tees and greens long after most of America’s older golf courses had found it necessary to redesign them to support the more intensive golf usage patterns of the late twentieth century. As Wawashkamo celebrated its first centennial in 1998, it remained faithful to the design heritage staked out by Alex Smith in 1898. 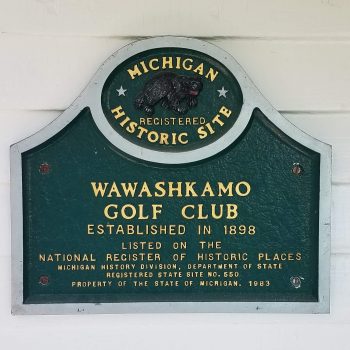 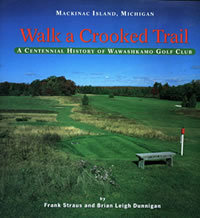 Wawashkamo Golf Club is a 501(c)(3) public charity organization, and all gifts are tax-deductible.